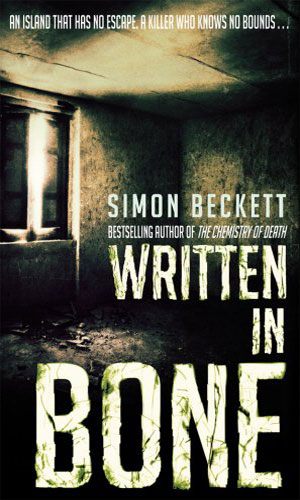 ‘I took the skull from the evidence bag and gently set it on the stainless steel table. “Tell me who you are…”‘

On his way back from an ongoing investigation into a serial killer in Scotland, forensic anthropologist David Hunter is asked to examine a fire-death on the remote Hebridean island of Runa. Told only that there is something ‘strange’ about it, Hunter is intrigued enough to accept – despite the worsening winter weather conditions, and the strain it will put on his already troubled relationship with his girlfriend, Jenny.

After a rough sea journey, he and the two police officers who accompany him are met by Brody, a retired DI who now lives on the island, and who discovered the body. Warned that it will be unlike anything he’s seen before, Hunter is still unprepared for what confronts him at the abandoned old crofter’s cottage – human remains that have been burnt to the bone, except for both feet and a single hand that have somehow survived unscathed. Even more inexplicably, nothing else in the cottage has been damaged by the fire.

It appears to be a textbook case of the phenomenon known as spontaneous human combustion. But Hunter is certain there is a more rational explanation for what has happened. And although the police seem ready to dismiss this as a bizarre accidental death, he finds himself drawn more towards Brody’s gut feeling: whatever caused this, it was no accident.

But even as Hunter comes face to face with the knowledge that there is a murderer on the island, the full force of an Atlantic storm descends. Cut off from the mainland, he begins to realise that the burned corpse is only one of Runa’s secrets. And as the storm rages, the killing begins in earnest…

Once we had left the harbour village, there was hardly any sign of life. The only sign of habitation we’d passed was an imposing old house, set well back from the road. Other than that there had been only the occasional ruins of cottages and sheep. In the gathering twilight, Runa looked beautiful, but desolate. It would be a lonely place to die.

There was a jolt as Brody turned off the road and bumped down an overgrown track.

Ahead of us, the car’s headlights picked out a crumbling old cottage. Wallace had said the body had been found at a croft, but there was little left here to show this must once have been a working farm. Brody pulled up outside and turned off the engine.

We climbed out of the car as the Range Rover drew up behind us on the track. The cottage was a squat, single story building that was slowly being reclaimed by nature. Looming up behind it was the peak I’d seen earlier, now only a black shape in the encroaching darkness.

“That’s Stynr Fell.” Brody told me. “Not much of a mountain, but they say if you climb to the top on a clear day you can see all the way to Scotland.”

“Never met anyone stupid enough to find out.”

He took a Maglight from his glove compartment, and we waited outside the car until Fraser and Duncan pulled up as well. I collected my own torch from the flight case in the police Range Rover, then we made our way towards the cottage, torch-beams bouncing and criss-crossing in the darkness. The cottage was little more than a stone shack, its walls furred with moss and lichen. The doorway was so low I had to stoop to go inside.

I paused and shone my torch around. The place was obviously long abandoned, a derelict remnant of forgotten lives. Water dripped from a hole in the roof, and the room we were in was cramped, a low ceiling added to the claustrophobic feel.

I dismissed the thought, annoyed with myself, and took stock of my surroundings. I was in what had once been a kitchen. There was an old range, a dusty cast-iron pan still standing on one of its cold plates. A rickety wooden table stood in the middle of the stoneflagged floor. A few cans and bottles were scattered on the floor, evidence the place hadn’t been entirely untenanted. It had the musty smell of age and damp, but nothing else.

For a fire death there seemed remarkably little signs of any fire.

“Through there,” Brody said, shining his torch on another doorway. As I approached it I caught the first faint, sooty whiff of combustion. But it was nothing like as strong as I would have expected. The door was broken, its rusted hinges protesting as it was pushed open. Watching my step, I went though into the other room. It was even more depressing than the kitchen. The stink of fire was unmistakeable now. The torchlight showed ancient, crumbling plaster on the bare walls, in one of which was the gaping mouth of a fireplace. But the smell didn’t come from that. Its source was in the centre of the room, and as I shone my torch on it my breath caught in my throat.

There was precious little left of what had once been a living person. No wonder Brody had looked as he did when I’d asked if it was badly burned. It was that, all right. Even the white heat of a crematorium isn’t enough to reduce a human body to ash, yet this fire had somehow done just that.

An untidy pile of greasy ash and cinders lay on the floor. The fire had consumed bone as readily as it had skin and tissue. Only the larger bones remained, emerging from the ash like dead braches from a snowdrift. Even these had been calcined, the carbon burned from them until they were grey and brittle. Presiding over them all like a ruined eggshell was a broken skull, lying with its jawbone canted off to one side. And yet, apart from the body, nothing else in the room had been damaged. The fire that had all but incinerated a human being, reduced its bones to the consistency of pumice, had somehow done so without burning anything else nearby. The stone flags below the remains were blackened, but a few feet away a tattered and filthy mattress lay untouched. Old leaves and twigs littered the ground, yet the flames had rejected even these.

But that wasn’t the worst of it. What had shocked me to silence was the sight of two unburned feet and a single hand protruding from the ashes. The bones jutting from them were scorched to black sticks, yet these were completely unmarked. Brody came and stood beside me.

‘Dynamite… Twists and turns up to the very last page.’

‘Exceptional… The suspense mounts with the body count.’

‘Beckett cranks up the suspense.’

‘Strong characters, grisly murders and non-stop suspense…impossible to put down.’

‘Rich in atmosphere and ripe with suspense.’

‘A classy suspense novel…aficionados of the twist ending will be in for a good tweaking.’

‘Full of suspense, up to and including the final cliffhanger.’

‘Beckett works the reader like a puppet…an amazing thriller.’