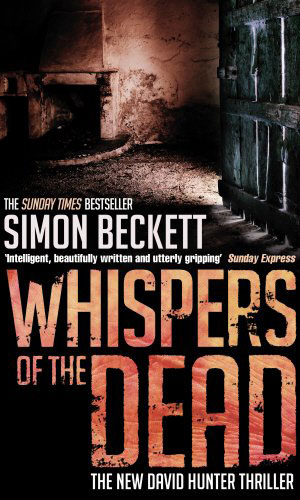 WHISPERS OF THE DEAD

In plain black letters were the words Anthropological Research Facility, but it was better known by another, less formal name. Most people just called it the Body Farm…’

The Sunday Times Bestseller. Available as a Bantam paperback

Recuperating from a near-fatal attack, forensic anthropologist David Hunter has returned to the renowned research facility where he first trained – the Body Farm in Tennessee. Still bearing physical and emotional scars, he hopes the trip will hone his old skills and restore his shattered confidence.

So when his former mentor invites him to assist on a murder investigation, he agrees. After all, he’s simply there as an observer – what could possibly go wrong?

But even Hunter is unprepared by the gruesome nature of the killing. The victim has been bound and tortured, and the body has decomposed beyond recognition – far more so than it should have. Fingerprints at the scene appear to identify the killer; however Hunter is convinced that nothing is quite as it seems.

Then a second body is found, and suddenly the team are plunged into a nightmare of deception and misdirection, in pursuit of a macabre serial killer whose forensic knowledge seems disturbingly familiar. As the death toll rises and Hunter finds he has enemies even within the investigation, he begins to fear that they might be on the trail of a maniac who simply cannot be stopped…

We left the autopsy suite and went to the storeroom where the casket was still in the aluminium container, awaiting collection by forensic agents. When we opened it the smell of putrefaction was as bad as ever. The shroud was crumpled inside, clotted and rank. Using a pair of forceps, Paul drew it open.

Until now it had been the body itself that had commanded everyone’s attention, not what it had been wrapped in. Now we knew what to look for, though, they weren’t hard to find. More pupal cases lay in the cotton sheet, camouflaged by the viscous black slurry from the corpse. Some were broken and empty, already hatched like the one I’d found, but others were still whole. There were no larvae, but after six months their softer bodies would have long since disintegrated.

“Well, that settles it,” Paul said. “You might explain away one, but not this many. The body must have been pretty badly decomposed before it was sealed in here.” He reached for the casket lid, but I stopped him. “What’s that?”

Something else was half-hidden in the folds of cotton. Taking the forceps from Paul, I gently teased it free.

“What is it, some kind of cricket?” he asked.

It was an insect of some kind, that much was obvious. Well over an inch in length, it was slender with a long, segmented carapace. It had been partially crushed, and its legs had curled in death, emphasising the elongated tear-drop shape of its body. I set it down on the sheet. Against the white background, the insect looked even more out of place and alien. Paul leaned forward for a closer look. “Never seen anything like that before. How about you?” I shook my head. I’d no idea what it was either.

Only that it had no right to be there.

I worked for another two hours after Paul left. Finding the unknown insect had blown away any vestiges of my earlier tiredness, so I’d carried on until I’d got all the exhumed remains soaking in vats of detergent. I was still buzzing with adrenaline as I left the morgue. Paul and I had decided it was too late to bother Tom with our discovery that night, but I felt convinced that it was a breakthrough. I didn’t know how or why, not yet. But my instincts told me the insect was important.

It was a good feeling.

Still preoccupied, I made my way across the car park. It was after ten and this part of the hospital was deserted. My car was almost the only one there. Street lights ran around the edges of the car park, but its interior was in almost total darkness. I was halfway across, starting to reach in my pocket for my car keys, when the hairs on the back of my neck stood up.

Suddenly I knew I wasn’t alone.

I quickly turned, but there was nothing to see. The car park was a field of darkness, the few other cars there solid blocks of shadow. Nothing moved, yet I couldn’t shake the feeling there was something – someone – nearby.

You’re just tired. You’re imagining things. I set off for my car again. My footsteps sounded unnaturally loud on the gravelled surface.

And then I heard a stone skitter behind me.

I spun round and was blinded by a bright stab of light. Shielding my eyes, I squinted past it as a dark figure with a torch emerged from behind the tank-like shape of a pick-up truck.

It stopped a few feet away, the torch still directed onto my face. “Mind tellin’ me what you’re doing here?”

The voice was gruff and threateningly civil, the accent a heavy twang. I made out epaulettes beyond the torch beam, and relaxed as I realised it was only a security guard.

“I’m going home,” I said. He didn’t move the light from my face. Its brightness prevented me from making out anything apart from the uniform.

I fished out the pass I’d been given for the morgue and showed it to him. He didn’t take it, just dipped the torch beam onto the plastic card before raising it to my face again.

“Could you shine that somewhere else?” I said, blinking.

He lowered the torch a little. “Workin’ late, huh?”

“That’s right.” Blotches of light danced in my vision as my eyes tried to adjust.

There was a throaty chuckle. “Graveyard shift’s a bitch, ain’t it?”

The torch beam was switched off. I couldn’t see anything, but heard his footsteps crunch away across the gravel. His voice floated back to me from the darkness.

You watch the lights from the car recede, waiting until they’ve disappeared before you step out from behind the pick-up. Your throat is sore from deepening your voice, and your pulse is racing, either from excitement or frustration, you can’t be sure.

The idiot never realised how close he came.

You know you took a chance confronting him like that, but you couldn’t help it. When you saw him coming across the car park it seemed a God-given opportunity. There was no one else around, and chances were no one would have even missed him till the next day. Without even thinking about it, you’d dogged his steps from the shadows, closing the distance between you.

But quiet as you’d been, he must have heard something. He’d stopped and turned round, and although you could still have taken him if you’d wanted, it gave you chance to think again. Even if your foot hadn’t stubbed that damn stone, you’d already decided to let him go. Lord knows, you’re not afraid to take chances, but some Brit no one’s ever heard of wasn’t worth the risk. Not now, not when the stakes are so high. Still, you’d been sorely tempted.

If it hadn’t been for what you’ve got planned for tomorrow you might have gone ahead anyway.

You smile as you think of it, anticipation bubbling up inside you. It’s going to be dangerous, but no one wins any prizes by playing safe. Shock and awe, that’s what you want. You’ve hidden your light under a bushel for long enough, watched your lessers take all the glory. High time you got the recognition you deserve. And after tomorrow no one’s going to be in any doubt what you’re capable of. They think they know what they’re dealing with, but they’ve no idea.

You take a deep breath of the warm spring night, savouring the sweetness of blossom and the faintly treacly smell of asphalt. Feeling strong and confident, you climb into the pickup.

You’ve got a busy day ahead.

‘Beckett is one of the country’s best crime writers… His books are intelligent, beautifully written and utterly gripping.’
SUNDAY EXPRESS

‘Kept me fascinated – and turning the pages – right up to the stunning and truly scary ending.’
SHOTSMAG

‘Strong, pungent writing is Beckett’s forte… lethal mindgames that are not for the squeamish.’
THE TIMES