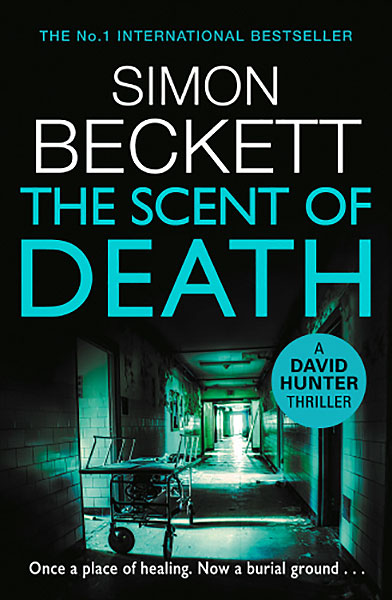 THE SCENT OF DEATH

It’s been a good summer for forensics expert Dr David Hunter. His relationship is going well and he’s in demand again as a police consultant. Life is good.

Then a call comes from an old associate: a body has been found, and she’d like Hunter to take a look.

The empty shell of St Jude’s Hospital now stands awaiting demolition, its only visitors society’s outcasts, addicts and dealers. A partially mummified corpse has been discovered in the hospital’s cavernous loft, but not even Hunter can say how long it’s been there. All he knows for sure is that it’s a young woman. And that she was pregnant.

Then the collapse of the loft floor reveals another of the hospital’s secrets. A sealed-off chamber, with beds still inside. Some of them occupied…

For Hunter, what began as a straightforward case is about to become a twisted nightmare that threatens everyone around him. And as the investigation springs yet more surprises, only one thing is certain.

Most people assume they’d know the scent of death. That decay has a distinctive, readily identifiable odour, a foul reek of the grave.

Decay is a complicated process. For a once-living organism to become skeletonized, reduced to dry bone and minerals, it first has to undergo an intricate biochemical journey.

While some of the gases created are offensive to human senses, they’re only part of the olfactory menu. Decomposing flesh can produce hundreds of volatile organic compounds, each with its own characteristics. Many of them – particularly those created during the mid stages those of putrefaction and bloat – possess an undeniable stench.

Dimethyl trisulphide, for instance, is reminiscent of rotting cabbage. Butyric acid and trimethylamine have the respective bouquets of vomit and old fish. Another substance, indole, carries the stink of faecal matter.

Yet in lower concentrations indole has a delicate, floral scent that’s prized by perfume manufacturers. Hexanal, a gas produced in both the early and later stages of decay, resembles freshly cut grass, while butanol is redolent of fallen leaves.

The aroma of decomposition can encompass all these notes, as complex as a fine wine. And, because death is nothing if not full of surprises, in some circumstances it can announce itself in a different manner entirely.

‘Brilliantly original … Simon’s first crime novel, The Chemistry of Death, blew me away and he just gets better by the book!’

‘Simon Beckett’s sixth novel featuring the forensic anthropologist is arguably his best … The occasionally macabre The Scent of Death is a superbly strong read – fascinating about Hunter’s intricate job.’

‘A satisfyingly dark and twisting thriller.’

JOHN WILLIAMS, THE MAIL ON SUNDAY

‘Beckett has regained his best form. While the exigencies of a macabre investigative thriller are dispatched with characteristic aplomb, the real achievement here is the threatening presence of the decaying hospital itself.’

‘The Scent of Death is a fantastically gripping, fast-paced and addictive read. I found myself unable to put the book down’

OVER THE RAINBOW BOOK BLOG

‘Easily read as a standalone but for constant readers an absolute gem, The Scent of Death is an intelligent, beautifully written and deeply layered novel that I read in one sitting – I highly recommend it and the ones before it – quality crime fiction at its very best.’

‘Highly addictive…Hunter is a fascinating character.’

‘I knew the book was going to be a bone-chilling story, and it didn’t disappoint.’

‘If you’re expecting Bones, think again. Dr David Hunter is very different to Dr Temperance Brennan and a lot more personable (in my humble opinion) … The writing really captured my imagination. I was there with Hunter in the loft, watching the floor below a colleague collapse to reveal the hidden room. From then on, I didn’t leave Hunter’s side.’

‘Actually left me with heart palpitations.’

‘I am gutted that I didn’t find this series sooner, but I cannot wait to binge read from book one. Simon Beckett is such a captivating storyteller who delivers grit and intensity in a way which makes my toes tingle – an author who is now high on my radar!’

‘Intriguing and tense with a dark edge!’

‘After a slow, steady start the story suddenly ramps up and for the last half I was reading at any opportunity…. Well-researched and gritty.’

‘SO CREEPY… the story is satisfying right to the end so high five, Simon Beckett.’ Live to Read.

‘From the very start, The Scent of Death grabbed my attention and held it right until the very end…I love a book where, all of a sudden, everything falls into place and you realise the brilliance of everything you’ve read – this definitely happened here.’

‘Cleverly weaves in enough forensic detail to explore the type of work that someone like Hunter would do but at the same time doesn’t overdo it.’

‘This fully immersive book makes you feel you are the expert as Beckett takes you on a forensic masterclass, digging for the answer right along with Dr Hunter. A must read for fans of Silent Witness…’