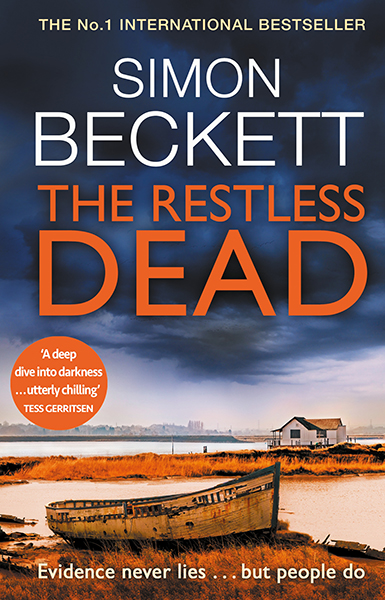 ‘Composed of over sixty per cent water, a human body isn’t naturally buoyant. It will float only for as long as there is air in its lungs, before gradually sinking to the bottom. If the water is very cold or deep, it will remain there, undergoing a slow, dark dissolution that can take years. But if the water is warm enough for bacteria to feed and multiply, then it will continue to decompose. Gases will build up, increasing the body’s buoyancy. And the dead will literally rise…’

It was on a Friday evening that forensics consultant Dr David Hunter took the call: a Detective Inspector Lundy from the Essex force. Just up the coast from Mersea Island, near a place called The Backwaters, a badly decomposed body has been found and the local police would welcome Hunter’s help with the recovery and identification . . .

Because they would like it to be that of Leo Villiers, the 31 year-old son of a prominent local family who went missing weeks ago, and they are under pressure to close the case. Villiers was supposed to have been having an affair with a married woman, Emma Derby. She too is missing, and the belief is that the young man disposed of his lover, and then killed himself. If only it was so straightforward.

But Hunter has his doubts about the identity of the remains. The hands and feet are missing, the face no longer recognisable. Then further remains are found – and suddenly these remote wetlands are giving up yet more grisly secrets. As Hunter is slowly but surely drawn into a toxic mire of family secrets and resentments, local lies and deception, he finds himself unable, or perhaps unwilling, to escape even though he knows that the real threat comes from the living, not the dead.

With its eerie and claustrophobic sense of place, explosive heart-in-mouth moments, and viscerally authentic forensics and police procedural detail, coupled with David Hunter’s own uncanny ability to understand the living as much as the dead, The Restless Dead stands as a masterclass in crime fiction and marks the stunning return of one of the genre’s best.

Small waves slapped against the bow as Trask guided the dinghy up the narrow creek. The low tide had exposed sandbanks on either side, and beyond them the saltmarsh stretched out as far as the eye could see. There was no sign of Trask’s daughter, no sign of anyone. Every now and then he would cut the engine and call Fay’s name into the silence, but his shouts went unanswered. We were running against the tide, and the water level in the creek was still falling. We wouldn’t be able to go much further, and as Trask stopped to shout again I could see that knowledge reflected in the grim set of his face. The dinghy drifted slowly backwards as we listened, hearing only the lapping of waves and the seagulls’ mournful cry. Mouth tight, Trask reached out to restart the engine.

I thought I’d heard something, but before I could say anything it came again.

It was as though someone had plucked Trask like a violin string. “All right, Fay, I’m coming!” he yelled, firing up the engine.

Directly ahead, the creek was split by a sandbank that emerged from the water like a beached whale. Trask’s knuckles were white on the tiller as he took the left hand fork, keeping to the deeper channel in its centre as he followed the direction the cry had come from. Rotten wooden pilings lined the banks here, sticking out of the mud like broken teeth, and then the dinghy rounded a bend and we saw his daughter.

She was lying half-in, half-out of the water, sobbing and covered with mud.

All around her the creek’s surface was broken with what at first I thought was some kind of aquatic weed, exposed by the falling tide. Then we drew closer and I realised what it was.

The creek was full of barbed wire.

“It hurts, Daddy, it hurts!” Fay sobbed as Trask ran the dinghy up onto the bank. We jumped out and splashed through the cold water towards her.

She couldn’t have anyway. Only one of her arms was free; the other was caught in loops of the rusty wire, from which clumps of grass and torn plastic trailed like tired party streamers. The barbs had bitten into flesh and clothing alike, and the mud that coated her was streaked with blood. Only her upper body was visible, but it was obvious that the wire snared her underwater as well.

Her face was white and blotched with tears beneath the muck. “Cassie jumped

in the water and then just started screaming! I tried to help her but she got free and I fell in, and… and…”

Trask crouched beside her, carefully testing the dripping wire with his hands.

This was a different man to the one I’d seen so far, tender and patient. But there was fear as well as anger in his eyes as he turned to me.

“I need you to keep the wire still while I get her free,” he said in a low voice.

“It’d be better with cutting gear,” I said. “The emergency services – ”

“No.” He shook his head. “It’ll take them too long to get out here. I’m not leaving her like this.”

I understood how he felt: if it had been my daughter I wouldn’t have wanted to wait either. I just wasn’t sure the two of us could free her without making her injuries worse.

But I could see Trask’s mind was already made up. “Be careful with any barbs

around her ankles and back of the knees,” I told him.

“I know,” he snapped, reaching for the wire. I grabbed his wrist.

“There are arteries just under the skin,” I said quietly, as he glared at me.

Fay’s jeans would have provided some protection, and there wasn’t enough blood to suggest the barbs had done any serious damage. But Trask would be removing them by touch alone, and the cold water would quickly numb his fingers. If a vulnerable artery was nicked his daughter could bleed out before we could get her to a hospital.

I waited until he gave a terse nod before I let him go. Fay began to panic when she saw what we were about to do. “No, no, Daddy, don’t – !”

She squeezed her eyes shut, turning her face away as her father and I set to work. The mud sucked at my feet as I took hold of the wire. Trask’s face was grim and intent as he squatted chest deep in the water, groping for the barbs below the murky surface. I did my best to keep the coils immobile, but they flexed and shifted like an unwound spring, each movement forcing a whimper from the trapped girl.

Soon both Trask and I were bleeding from cuts to our own hands where the jagged metal points had ripped the skin like paper.

Even so, I knew we’d been lucky. If the tide had been coming in rather than going out this could have been a very different story. As Trask prised the barbs from his daughter’s flesh, one by one, I studied the wire more closely. The coils disappeared into the muddy water in the centre of the channel but I could see where they re-emerged at the far side, wrapped around the decaying wooden pilings exposed by the low tide. I felt a growing disquiet as I realised what that meant. The barbed wire that had snared the girl hadn’t been casually discarded. It was stretched across the full width of the creek, in a way that couldn’t have been accidental.

Someone had put it here deliberately.

Trask grimaced with effort as his hands and lower arms groped for the invisible barbs below the water.

“Good girl. Only one more,” he told Fay. He gave me a glance. “Get ready to pull the wire away.”

His shoulders tensed, and the girl gave a cry of pain. Then Trask lifted her, water sluicing from them as he straightened. The wire was heavier than I’d expected, moving sluggishly as I dragged it clear so Trask could carry his daughter up the muddy bank. Pausing to tug myself free from a persistent barb, I waded after them.

Fay was sobbing, clinging to her father as he murmured reassurances. She was shivering and bleeding, but none of her wounds seemed serious. Thank God, I thought, but then she stared past me and I saw her eyes widen in shock. I looked back to see a disturbance in the middle of the creek. Freed from their tension, the submerged coils of wire were shifting. The water roiled, as though a huge fish was turning underneath, and then something broke the surface.

Caught on the barbs, the body emerged slowly from the creek, scarecrow arms and legs hanging like a broken marionette. As Fay’s screams rang out, a pale head topped with lank strands of hair rolled empty eye sockets to the sky.

Then, as though retreating from the daylight, it sank back and the water closed over it once more.

‘The forensics are chillingly authentic, the writing is both taut and beautifully atmospheric.’

‘Gorgeously atmospheric, brilliantly creepy and some of the best characters I’ve read in a long time. This book was everything I want in my crime thrillers.’

‘Simon Beckett is a literate and dexterous novelist. The Restless Dead is a luxuriously dark and compelling read. It’s also highly addictive, so before you open the front cover cancel any plans you might have.’

‘Ideal for fans of Patricia Cornwall and Kathy Reichs (although this is streets ahead in my opinion).’

‘I found Beckett’s vivid imagery of both setting and investigations to be a work of art… A suspenseful, spine tingling roller-coaster ride of a novel.’

‘A real cracker of a read.’

‘This is crime writing at its intelligent best… Highly recommended.’

‘Absolutely brilliant… well fleshed out characters and the level of detail in this novel make it one of the best thrillers I’ve read so far this year.’

‘A brilliant read… Simon Beckett is a wonderful storyteller.’