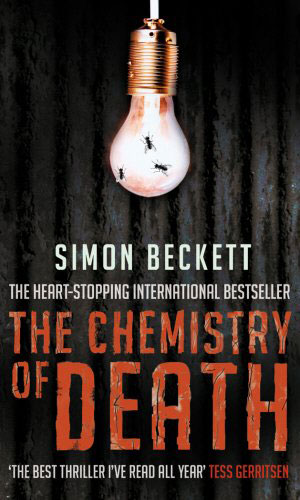 THE CHEMISTRY OF DEATH

‘A dead bird had been tied to the stone. It was a mallard, bound with wire around its neck and feet. Uncertain whether to untie it, she leaned forward to examine the wire more closely.

The bird opened its eyes.’

When the bizarrely mutilated body of a young woman is found near the tiny isolated Norfolk village of Manham, it isn’t just the fact that she was a friend that disturbs Dr David Hunter. A one-time high-profile forensic anthropologist, he was once all too familiar with the different faces of death, until a devastating personal tragedy made him abandon his former life and career.

Now hidden away as a country doctor, Hunter had hoped his past would remain buried. So when he’s asked to use his arcane skills to help track down the killer, he’s reluctant to become involved. He knows to do so will only stir up the painful memories he’s been trying so hard to forget. But then another woman disappears, plunging Manham into a maelstrom of fear and paranoia where no one, not even Hunter, is exempt from suspicion. As the once peaceful community begins to tear itself apart, he knows he will need all his knowledge and expertise if the twisted killer is to be stopped…

A human body starts to decompose four minutes after death. The body, once the encapsulation of life, now undergoes its final metamorphoses. It begins to digest itself. Cells dissolve from the inside out. Tissue turns to liquid, then to gas. No longer animate, the body becomes an immoveable feast for other organisms. Bacteria first, then insects. Flies. Eggs are lain, then hatch. The larvae feed on the nutrient rich broth, and then migrate. They leave the body in orderly fashion, following each other in a neat procession that always heads south. South east or south west sometimes, but never north. No one knows why. By now the body’s muscle protein has broken down, producing a potent chemical brew. Lethal to vegetation, it kills the grass as the larvae crawl through it, forming an umbilical of death that extends back the way they came. In the right conditions – dry and hot, say, without rain – it can extend for yards, a wavering brown conga-line of fat yellow grubs. It’s a curious sight, and for the curious what could be more natural than to follow this phenomenon back to it’s source? Which was how the Yates boys found what was left of Sally Palmer.

Neil and Sam came across the maggot trail on the edge of Farnley Wood, where it borders the marsh. It was the second week of July, and already the unnatural summer seemed to have been going on forever. The heat seemed eternal, leeching the colour from the trees and baking the ground to the hardness of bone. The boys were on their way to Willow Hole, a reed pond that passed as the local swimming pool. They were meeting friends there, and would spend the Sunday afternoon bombing into the tepid green water from an overhanging tree. At least, so they thought. I see them as bored and listless, drugged by the heat and impatient with each other.

Neil, at eleven three years older than his brother, would be walking slightly ahead of Sam to demonstrate his impatience. There’s a stick in his hand, with which he whips the stalks and branches that he passes. Sam trudges along behind, sniffing from time to time. Not from a summer cold, but from the hay fever that also reddens his eyes. A mild antihistamine would help him, but at this stage he doesn’t know that. He always sniffs during summer. Always the shadow to his bigger brother, he walks with his head down, which is why he and not his brother notices the maggot trail.

He stops and examines it before shouting Neil back. Neil is reluctant, but Sam has obviously found something. He tries to act unimpressed, but the undulating line of maggots intrigues him just as much as it does his brother. The two of them crouch over the grubs, pushing dark hair out of similar faces and wrinkling their nose at the ammoniac smell. And though neither could later remember whose idea it was to see where they were coming from, I imagine it to be Neil’s. Having walked past the maggots himself, he would be keen to assert his authority once more. So it’s Neil who sets off first, heading towards the yellowed tufts of marsh grass from which the larvae are flowing, and leaving Sam to follow.

Did they notice the smell as they approached? Probably. It would be strong enough to cut through even Sam’s blocked sinuses. And they probably knew what it was. No city boys, these, they would be familiar with the cycle of life and death. The flies, too, would have alerted them, a somnambulant buzzing that seemed to fill the heat. But the body they discovered was not the sheep or deer, or even dog, they might have expected. Naked but unrecognisable in the sun, Sally Palmer was full of movement, a rippling infestation that boiled under her skin and erupted from mouth and nose, as well as the other less natural openings in her body. The maggots that spilled from her pooled on the ground before crawling away in the line that now stretched beyond the Yates boys. I don’t suppose it matters which one broke first, but I think it would be Neil.

As ever, Sam would have taken his cue from his big brother, trying to keep up in a race that led them first home, then to the police station.

And then, finally to me.

As well as a mild sedative, I also gave Sam antihistamine to help his hay fever. By this time, though, he wasn’t the only one to have red eyes. Neil too was still shaken by their discovery, although now he was beginning to recover his juvenile poise. So it was he rather than Sam who told me what had happened, already starting to reduce the raw memory to a more acceptable form, a story to be told and retold. And later, when the tragic events of that preternaturally hot summer had run their course, years later Neil would be telling it still, forever identified as the one whose discovery had started it all.

But it hadn’t. It was just that, until then, we had never realised what was living among us.

‘Terrifying… Rarely have the mechanics of suspense been so effectively realized outside an Alfred Hitchcock movie.’

‘Excellent… Plotted and written with panache, with high marks for shock value.’

‘Perfectly captures the claustrophobic horro of a rural community in a crisis…absolutely compelling and so deliciously scary.’

‘Tense and humane, a fascinating exploration of the hunterlands of horror.’