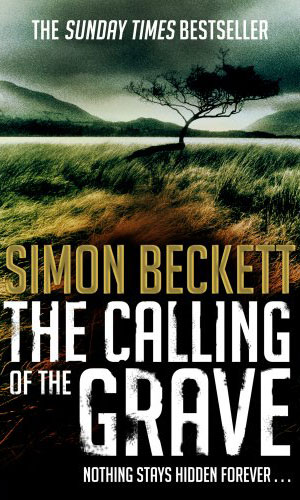 THE CALLING OF THE GRAVE

‘At first glance it could have been anything – a stone, a knotted root – until you looked more closely. Thrusting out of the wet earth, its bones visible through rags of flesh, was a decomposing hand…’

The Sunday Times Bestseller. Published as a Bantam paperback in February 2012.

Eight years ago Hunter was part of a forensic team tasked with finding the Dartmoor graves of missing teenage girls, the victims of a brutal rapist and murderer called Jerome Monk.

Back then Hunter’s life was very different – happily married and with a young daughter, he was confident in his abilities and optimistic about the future.

Now that’s all changed. Haunted by personal tragedy, he’s forced to return to Dartmoor when Monk escapes from prison and appears to be targeting people involved in the search.

As Hunter confronts a past he’d hoped was buried, he begins to realise that the events of eight years ago are far from over, and that his only chance of ending the violence unfolding now is by questioning everything – and everyone – he thought he knew.

The numbers of decay. That’s the ratio by which all organisms, large and small, decompose. In air, in water, in soil. Provided it’s the same climate, a submerged body will take twice as long to break down as one left on the surface. Underground it will take eight times as long. One, two, eight. It’s a simple formula, and an inescapable truth.

The deeper something is buried, the longer it survives.

Bury a body, and you deprive it of the carrion-feeding insects that thrive on dead flesh. The microorganisms that would normally digest the soft tissues can’t function without air, and the cooling insulation of dark earth further restricts the onset of decay. Biochemical reactions that would normally break down the cells themselves are slowed by the lower temperature. A process that would, under other circumstances, take days or weeks can last for months. Years, even. Sometimes longer.

Starved of light, air and warmth, it’s possible for a dead body to be preserved almost indefinitely. Cocooned in its cold burrow, it exists in near stasis, indifferent to the passing of seasons above. But cause and effect applies here, as anywhere else. Just as, in nature, nothing is ever truly destroyed, then neither is anything ever completely concealed. No matter how deeply buried, the dead can still make their presence known. One. Two. Eight.

‘In The Calling of The Grave, Beckett has created a masterpiece of intricacy, as thrilling as it is intelligent.’

‘Hunter is a fine creation…the plot swirls back and forth like tendrils of moor mist caught in the breeze.’

‘As bone-chillingly bleak as its subject and leavened with graveyard humour, this procedural doesn’t disappoint.’