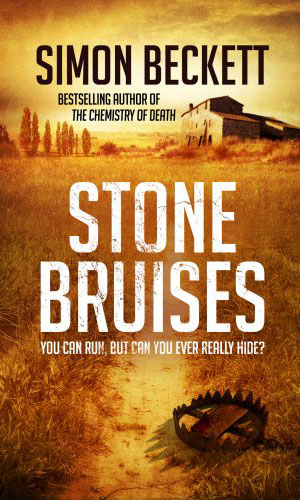 ’Somebody!’ I half-sob and then. More quietly, ‘please.’ The words seem absorbed by the afternoon heat, lost amongst the trees. In their aftermath, the silence descends again. I know then that I am not going anywhere…

On the run from bloody events in London, Sean flees to rural France to escape his own past. When he’s badly injured while trying to hitch a lift, he awakes to find himself bedridden on an idyllic but isolated farm. Unsure if he’s a patient or prisoner, he’s little choice but to accept the ministrations of the enigmatic Mathilde and her precocious sister, Gretchen.

But their father is less welcoming. Volatile and violently protective of his privacy, Arnaud makes his dislike of the young Englishman clear. Even so, for Sean there’s something beguiling about what the farm represents. Tranquil and remote, it’s a perfect place to hide.

Except some questions can’t be ignored. Why has Arnaud gone to such extreme lengths to cut himself and his family off from the outside world? Why is he hated so much in the neighbouring village? And why won’t anyone talk about Mathilde’s estranged lover?

As Sean tries to lose himself in the heat and dust of a French summer, he comes to realise that the farm has dangerous secrets of its own. It might be a perfect hiding place but that means nobody knows he’s there.

I follow the track back through the wood to the road. It’s as quiet as before. I lock the gate and keep on walking. Every now and then I’ll glance back to see if a car is coming, but there’s only the sun-baked tarmac. I hook my thumbs under the rucksack straps to take some of the weight. It feels heavier when I remember what’s in it, so I clear my mind and concentrate on putting one foot in front of the other.

The drone of an engine gradually detaches itself from the overheated silence. I turn and see something approaching, a dark speck distorted by the heat. At first it seems to hover unmoving above a reflection of itself. Then its tyres stretch downwards and touch the road, and it becomes a blue car speeding towards me.

I’m already stepping out from the shade of the trees when I notice there’s something on its roof. Realisation comes a moment later. I vault over the barbed wire fence, snagging my jeans and landing awkwardly because of the rucksack. Without stopping I plunge into the woods as the note of the car’s engine grows louder. When it sounds almost on top of me I duck down behind a tree and look back at the road.

The police car blurs past. I listen for any signs of it slowing, any indication that they’ve seen me. But the sound of its engine steadily dwindles to nothing. I rest my head against the tree. I know I’m over-reacting, that the French police probably won’t care about me, but I’m too jumpy to take the chance. And I daren’t risk my rucksack being searched.

There’s a bitter taste in my mouth. Blood; I’ve bitten through my lip. I spit to clear it and take the water bottle from my rucksack. My hands are trembling as I rinse my mouth, then take stock of where I am. The wood is set on a shallow hillside, and some distance away I can see the glimmerof a lake through the trees. To one side of it are the roofs of farm buildings, small and insignificant at this distance. I guess they must be where I asked for water, so I’m probably still on their land.

I stand up and brush off the twigs and soil that cling to my jeans. My t-shirt is stuck tome with sweat. It’s so hot the  air seems baked. I look at the lake again, wishing I could swim in it. But that’s not going to happen, and I need to keep moving. Taking another swig of water, I step away from the tree and cry out as something seizes my foot. I drop to my knees as pain lances up my leg. My left foot is engulfed in a pair of black, semi-circular jaws. I try to pull free but the movement sends fresh hurt searing up the length of my leg.

I stop moving, sucking in panicked breaths. I’ve stepped in some sort of iron hunting trap, hidden away in a knotted tangle of tree roots. It clamps my foot from mid-instep to above the ankle, its jagged iron teeth piercing the tough leather of my boot. They’ve stabbed so deep into my flesh that I can feel them nuzzling coldly against the bone.

I squeeze my eyes shut, trying to deny the sight. “Oh, fuck! Fuck!”

But that doesn’t get me anywhere. Shucking off the rucksack, I shift to a better position and take hold of the trap’s jaws. They don’t budge. Bracing my free foot against atree root I try again. This time I’m rewarded by the tiniest  sense of give, but not nearly enough. My arms quiver with the strain as the metal edges bite into my hands. Slowly, I let it ease shut and sit back, gasping.

Sucking the sore patches on my hands, I study the trap more closely. It’s crudely made, lightly ochred with rust but not enough to suggest it’s been lying here very long. In fact, the oil on the hinges looks fresh. Worryingly so, in fact. Trying not to think what that might mean, I turn my attention to the chain that tethers it in place. It’s short and leads to a wooden spike buried among the tree roots. A few tugs are enough to convince me that I’m wasting my time trying to pull it out.

Sitting with my trapped leg stuck out in front of me, I put my hand down to push myself to a more comfortable position and feel something wet. The bottle of water is lying where I dropped it, most of its contents soaking into the dry earth. I snatch it up, even though it’s already spilled as much as it’s going to. Taking a careful sip, I re-cap what’s left and try to think.

OK, stay calm. The initial pain has evolved into a throbbing, like toothache, that extends up my shin. Blood is beginning to soak through the leather of my boot. Except for the buzz of insects the sun-dappled woods are silent. I look over at the distant roofs of the farm buildings. They’re too far away for anyone to hear me shout, but I don’t want to do that anyway. Not unless I have to.

I rummage through my rucksack for my pocketknife. I know it’s in there somewhere, but as I search for it I my fingers encounter something else. I pull it out and a shock runsthrough me.  The photograph is dog-eared and faded. I’d no idea it was in the rucksack; I’d forgotten I even had it. The girl’s face is almost obscured by a crease, distorting her smile.

Behind her is the whiteness of Brighton pier, vivid against a blue sky. Her hair is blond and sun bleached, her face tanned and healthy. Happy.

I feel dizzy. The trees seem to tilt as I put the photograph away. I take deep breaths, willing myself not to lose it. The past’s gone. There’s nothing I can do to change it, and the present is more than enough to worry about. I find my pocketknife and shift to a better position. The knife has a three-inch blade, a bottle opener and a corkscrew, but nothing for dismantling iron traps. Jamming the blade between the jaws, I try to prise them open and fall back as it snaps.

I throw the broken knife down and look around for something else. There’s a dead branch nearby. It’s out of reach but I use a smaller one to drag it nearer, then wedge its thickest end between the jaws. The metal gouges at the wood but the trap slowly begins to open. I apply more pressure, gritting my own teeth as the iron ones start to pull out of my flesh.

The stick breaks. The jaws spring together again.

When the pain subsides I’m lying flat on my back. I push myself up and fling the stick impotently at the trap.

I can’t pretend any longer that this isn’t serious. Even if I could free my foot I doubt I could walk very far on it. But I’d willingly settle for that problem, because not being able to free myself is far more frightening.

Happy now? You’ve brought this on yourself. Blanking out those thoughts I try to focus on the more immediate problem. Using the knife’s corkscrew, I start digging around the spike that holds the trap in place. It’s a futile attempt but allows me to vent some emotion by stabbing the ground and tree roots. Eventually, I let the knife fall and slump back against the trunk.

The sun has sunk noticeably lower. It won’t be dark for hours yet, but the thought of having to lie there all night is terrifying. I rack my brain for ideas, but there’s only one thing left I can do.

I take a deep breath and yell.

My shout dies away without an echo. I doubt it will have carried to the farm I went to earlier. I yell louder, in English and French, shouting until my voice grows hoarse and my throat hurts.

“Somebody!” I half-sob and then, more quietly, “Please.” The words seem absorbed by the afternoon heat, lost amongst the trees. In their aftermath, the silence descends again.

I know then that I’m not going anywhere.

‘I literally could not put this book down…Five stars.’

‘A good book to keep one entertained on a winter’s evening.’

‘An engaging and darkly unsettling read.’

‘If you want a thoughtful, well-constructed thriller with some unexpected twists and a particularly surprising climax.’

‘Simon Beckett’s talent for describing the everyday and usually mundane in an elegant manner makes Stone Bruises a great read.’